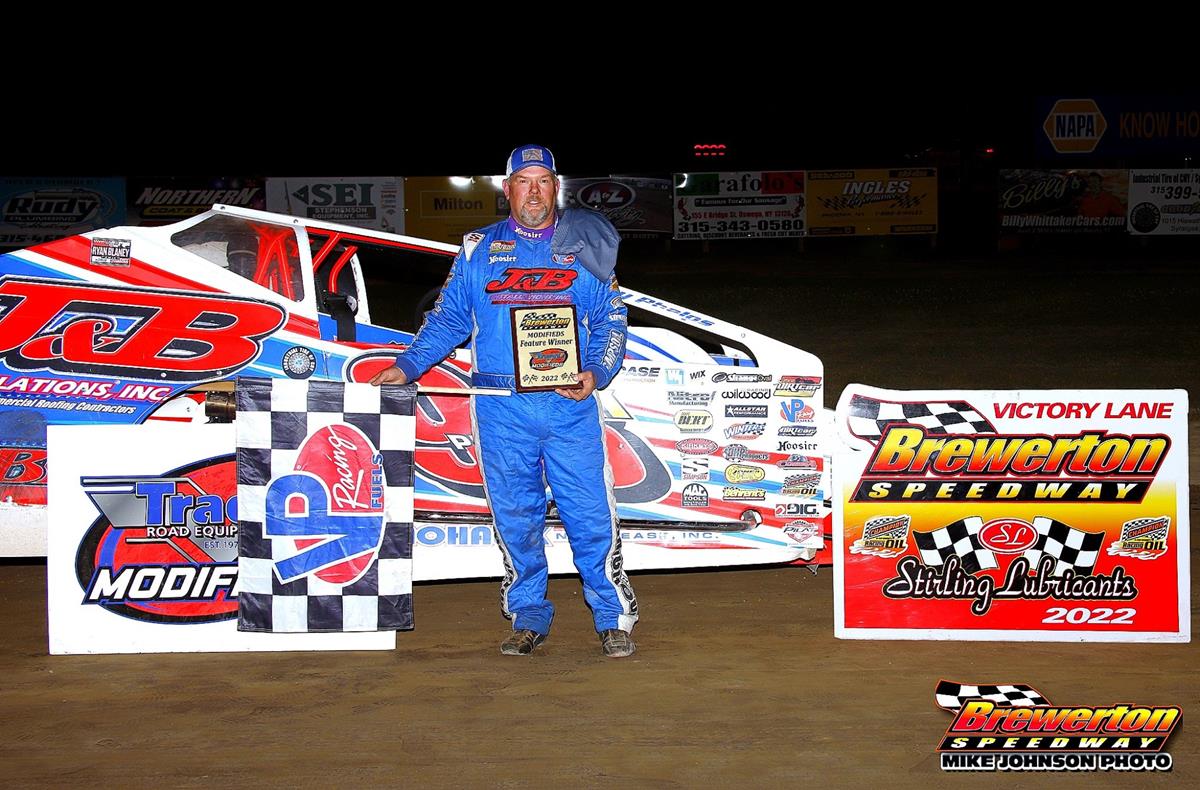 Jimmy Phelps The Class of The Brewerton Speedway Modified Field

BREWERTON, NY – (July 1, 2022) – Jimmy Phelps has been consistent near the front of the field at the Brewerton Speedway all season in the Tracey Road Equipment DIRTcar Big Block Modifieds. One thing has eluded him, a trip to victory lane. All that changed Friday night as drove to victory lane after the 35-lap feature.

Phelps would battle Tom Sears Jr. for several laps for the lead when Phelps would finally see the opening he needed on lap eighteen when he was able to drive under and power by Sears into the lead, and from there cruised to the popular win.

The 35-lap Modified feature would see Joe August lead the opening three laps, when Nick Krause in his small block would drive into the top-spot.

Krause and Tom Sears Jr. would have a tight battle for the lead, with Sears ducking under and by Krause on lap ten. Jimmy Phelps was right there with the top-two, with August and Adam Roberts racing for fourth and fifth.

With fifteen laps complete, Sears and Phelps were in a two-car breakaway having a tight battle for the lead while Krause, August, and Max McLaughlin who started tenth, showed in the top-five.

A yellow on lap twenty would slow the pace, putting Phelps, Sears, Krause, McLaughlin, and August in the top-five for the restart.

With ten laps to go, Phelps was on rails on the bottom of the speedway opening a half a straightaway lead. Sears and McLaughlin were in a close fight for second, with Jackson Gill and Chad Phelps in fourth and fifth.

Over the final laps nobody seriously challenged Jimmy Phelps as he cruised to his first win of the season. Max McLaughlin, Tom Sears Jr., Jackson Gill, and Tim Sears Jr. completed the top-five.

Robert Gage would lead the opening five laps of the 25-lap Sportsman feature, when Austin Germinio would drive into the top-spot.

With ten laps showing on the scoring tower, Germinio would bolt out to a straightaway lead with Gage, Zach Sobotka, Amy Holland, and Chris Hulsizer locked in a close fight for second through fifth.

Germinio still showed the way with ten laps to go as Holland started chipping away at the lead with Gage, Sobotka, and Hulsizer still showing in the top-five.

On lap nineteen, Holland would use the traffic to her advantage as she drove by Germinio to be scored the new leader.

The final caution of the race came on lap twenty-three, setting up a green, white, and checker finish.

When the green came back out, points leader Amy Holland drove away for her first win of the season. Austin Germinio, Zach Sobotka, Robert Gage, and Alan Frink finished second through fifth.

The 25-lap A-Main would see Larry Wight blast into the lead at the start and by lap five would open a straightaway lead while Shawn Donath, Matt Tanner, Jason Barney, and Chad Miller raced in the top-five.

Shawn Donath took advantage of a lap-six yellow as he would wrestle the lead away from Wight on the restart.
On lap ten, Wight pulled off a classic slide job to retake the lead. Behind Wight and Donath were Barney, Danny Varin, and Tommy Wickham in their own battle for third through fifth.

With ten laps to go, Wight built up a huge lead while easily putting cars down a lap. Donath, Varin, Barney, and Wickham still showed in the top-five.

Over the remaining laps nobody challenged Larry Wight the rest of the way as he won by over three seconds for his third straight Brewerton Speedway ESS win. Dylan Swiernik, Jason Barney, Jordan Poirier, and Shawn Donath rounded out the top-five.

Ray Bechler led the first five laps of the 15-lap Mirabito Four-Cylinder feature before Chris Bonoffski drove into the lead and from there cruised to the win. Eric Rawley, Damien Bechler, Ray Bechler, and Clayton Koch finished second through fifth.

Any questions you might have and for marketing opportunities, contact Cory Reed at (315) 668-6906 or cory@brewertonspeedway.com. For all the latest news, go to www.brewertonspeedway.com powered by My Race Pass and like the speedway social media pages.