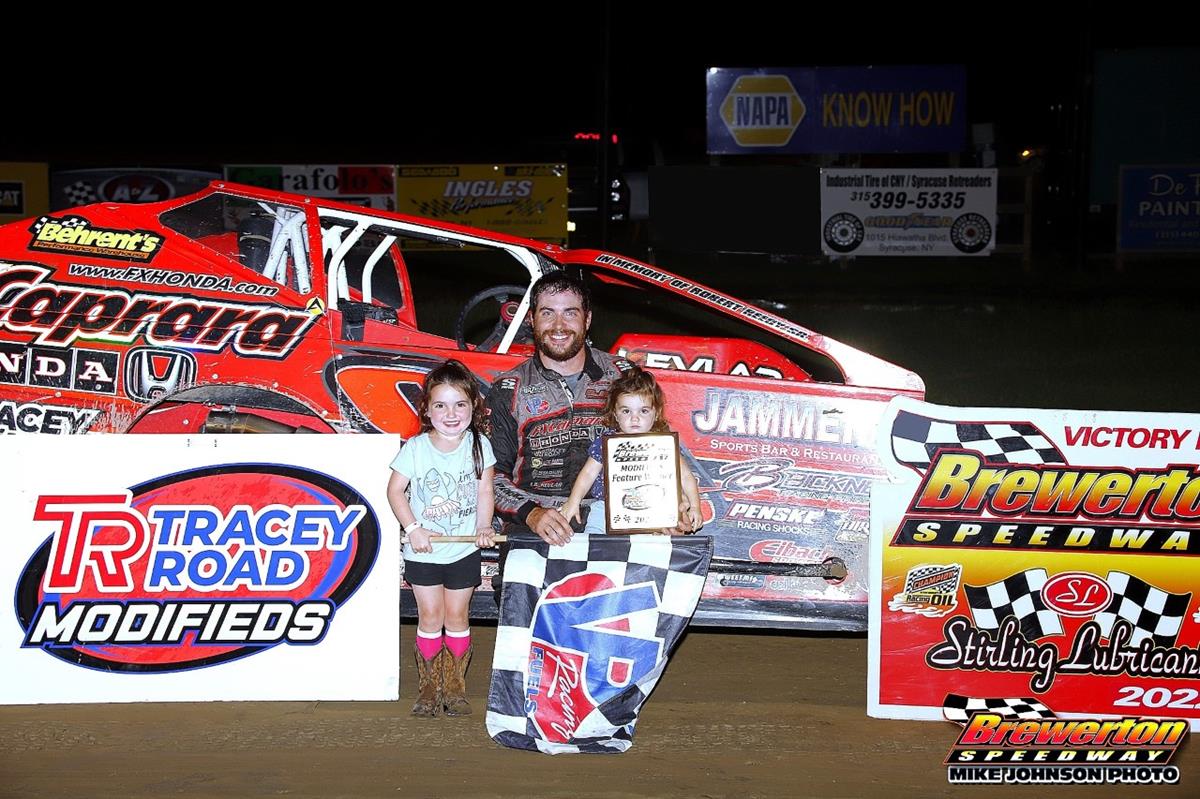 BREWERTON, NY – (August 26, 2022) – Friday night at the Brewerton Speedway Larry Wight took the big win in the 35-Lap DIRTcar Big Block Modified feature. With his win, Wight will be two points behind Chris Hile in the final showdown for the Track Championship, Friday, September 2.

Not to be outdone, the DOT Foods DIRTcar Sportsman battle for the Track Championship will see Amy Holland leading Alan Fink by eleven points to decide their Champion.

Tyler Trump took advantage of a front row starting spot in the Modified feature and would drive out to a ten-car length advantage by lap five over Marshall Hurd, with the racing behind them tight between Sean Beardsley in a small block, Chad Phelps, and Ben Bushaw for third through fifth.

Trump would lengthen his lead to a straight away on lap-ten over Hurd. Beardsley, Phelps, Larry Wight from ninth, and Tim Sears Jr. tenth were in a tight battle behind the top-two.

A caution on lap-fourteen would see Trump’s two-second lead disappear. The restart would see Wight move into second and then would take the lead after a caution and restart on lap-sixteen.

Wight would bolt away from the field by lap twenty, leaving Trump, Sears, Hurd, and Jimmy Phelps to race for top-five spots.

With ten-laps to go, Wight opened an over two-second lead as he caught the back of the field with Trump, Sears, Hurd, and Phelps still in the top-five.

Over the final laps and no cautions would see Larry Wight cruise to the win over Tyler Trump and Tim Sears Jr.. Chris Hile was a man on a mission coming from fifteenth to finish fourth and a two-point lead over Wight heading into the points finale. Jimmy Phelps finished fifth.

The 25-Lap Sportsman feature had Chris Hulsizer and Savannah Laflair in a two-car breakaway at the front of the field by lap five with Riley Rogala, Buddy Leathley, and Cody Manitta in the top-five.

Hulsizer and Laflair still raced for the top-spot on lap ten, with Rogala, Leathley, and Manitta starting to close the gap on the top-two.

With ten laps remaining Hulsizer held onto a slim lead over Laflair with Rogala, Manitta and Leathley showing in the top-five.

A yellow on lap twenty would set up a five-lap dash to the checkers.

Over those final laps, there was no stopping Chris Hulsizer from winning his first career DOT Foods DIRTcar Sportsman feature at the Brewerton Speedway. Riley Rogala, Savannah Laflair, Cody Manitta, and Stephen Marshall completed the top-five.

Riley Rogala had his purse withheld for non-performance technical issues.

Brad Harris led the opening two laps of the 20-Lap AmeriCU Credit Union Mod Lite feature when the caution would come out. On the restart, Joe Isabell would charge from third to the lead and started driving away from the field.

Isabell was in total control of the race in his own zip code out front until a late yellow bunched the field up. Kyle Demo threw everything he had at Joe Isabell, but Isabell was a touch faster, winning his sixth feature of the year by 0.191 of a second at the checkers. Justin Williams, Joe Garafolo, and Joel Moller finished third through fifth.

The final 15-Lap Mirabito Four Cylinder Super Stock feature of the 2022 racing season was a memorable one.

Corey Valade and Justin Pope both lead laps in a tight fight for the lead while Chris Bonoffski was making his way to the front from his fifteenth starting spot, setting up a wild final lap.

You could have thrown a blanket over Pope, Valade, and Bonoffski with lap cars thrown in for excitement in turns three and four. The mad scramble coming out of turn four to the checkers would see Bonoffski winning by inches at the checkers over Pope, and Valade. Jacob Dupra and Zak Petrie finished fourth and fifth.

Bonoffski’s win was the icing on the cake, as he is also the 2022 Track Champion.

This Friday, September 2nd is the final weekly race of the 2022 season presented by 87 Speed.

The stage is set for an epic battle for the Track Championships in the Big Block Modifieds and the Sportsman. Who have you got?