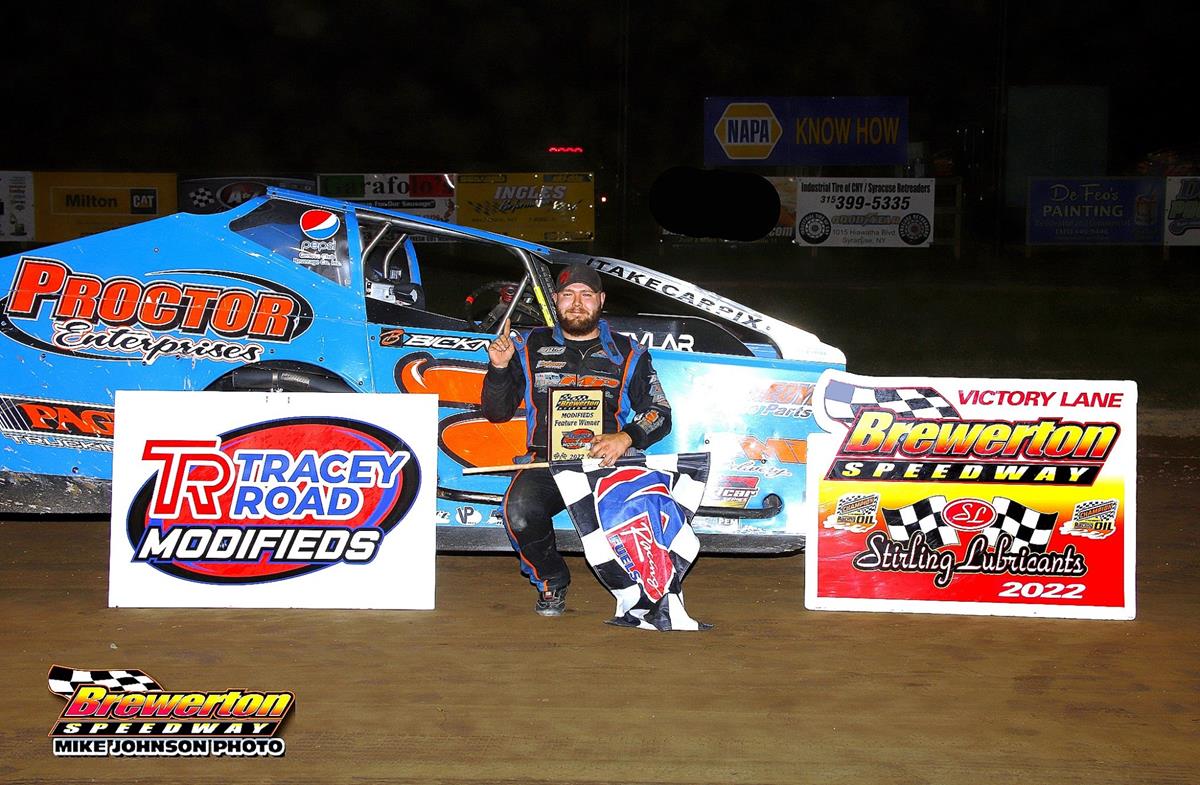 The final laps of the 35-Lap Tracey Road Equipment DIRTcar Modified feature will be talked about for a long time as Payne outdueled Tom Sears Jr. and Larry Wight.

The Modified feature saw Jeff Taylor grab the lead at the start and would open a half a straightaway lead by lap five as Ben Bushaw, Zach Payne, Max Hill, and Tom Sears Jr. gave chase.

With ten laps on the scoring tower and no yellows, Taylor was on cruise control out front leading by almost two second as Bushaw, Payne, Hill, and Sears raced for second through fifth.

On lap fifteen Payne had moved into second and would erase Taylor’s big lead and then would drive into the lead on lap sixteen.

The first yellow of the race came on lap twenty-three and would erase Payne’s lead. The top-five for the restart would be Payne, Taylor, Larry Wight from fourteenth starting spot, Sears, and Chris Hile.

With ten laps remaining, the intensity was turned way up as you could have thrown a blanket over Payne, Sears, and Wight as the final laps started clicking off the lap counter. One lap later Sears powered into the lead off the topside of the speedway.

As Sears, Payne, and Wight continued to slug it out for the lead, Payne shot by Sears and back into the lead with five laps to go.

Over the final laps Tom Sears Jr. and Larry Wight threw everything they had at Payne but to no avail as Zach Payne cruised under the checkers for not only his first Brewerton win, but his first modified victory anywhere. Tom Sears Jr., Larry Wight, Chris Hile, and Max McLaughlin finished second through fifth.

Larry Wight and Chris Hile came into Friday night tied in the battle for the track championship. With three-point races left, Wight has a two-point lead over Hile.

Stephen Marshall would lead the first seven laps of the 25-Lap Sportsman feature when Zach Sobotka would drive into the lead using the topside of the speedway on lap eight.

On lap-ten Sobotka, Marshall, and Brandon Carvey were in a three-car breakaway race at the front with Savannah Laflair, and Kyle Devendorf in fourth and fifth.

Sobotka still led with ten to go but now had Carvey all over his back bumper with Carvey seeing the opening he needed on lap seventeen to drive into the top-spot.

Once out-front Brandon Carvey drove away from the field for his third win of the season. Stephen Marshall, Kyle Devendorf, and Matt Caprara finished third through fifth. Caprara was light at the scales awarding Dale Caswell with a fifth-place finish.

Ray Bechler led the opening five laps of the 15-Lap Four Cylinder Super Stock feature when Chris Bonoffski would drive into the lead with the winning pass on lap six. Damien Bechler, Ray Bechler, Zak Petrie, and Clayton Koch would complete the top-five.

With only two-point races left, the Four Cylinder Super Stock Champion will come down to their final event as Damien Bechler leads Chris Bonoffski by a slim four points coming into Friday, August 19.

This Tuesday, August 16 the Modified Super DIRTcar Series will invade the Brewerton Speedway for race two of SummerFAST. Joining the SDS Series will be the AmeriCU Credit Union Mod Lites.

Any questions you might have and for marketing opportunities contact Cory Reed at (315) 668-6906 or cory@brewertonspeedway.com. For all the latest news visit www.brewertonspeedway.com powered by My Race Pass and like the speedway social media pages.