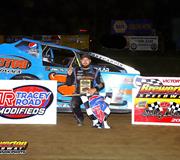 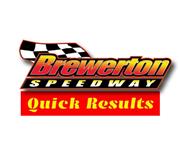 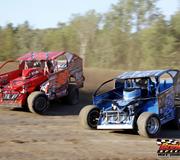 Brewerton Speedway Modified Points Tied at The Top in The Chase f...

8/10/2022
BREWERTON, NY – (August 10, 2022) – Coming into this Friday, August 12 race night there is a battle royal in the Modifieds coming into the final four point-paying races to decide 2022 track champions. Not to be outdone, there is only a nine- point separation at the top of...more 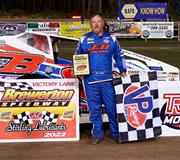 Jimmy Phelps Drives To victory Lane for Second Win of The Year...

8/6/2022
BREWERTON, NY – (August 5, 2022) – Jimmy Phelps started the 35-LapTracey Road DIRTcar Big Block Modified feature in the twelfth spot and had his car working no matter where he put it on the speedway on the way to the front. Phelps would move into second on a lap eleven...more 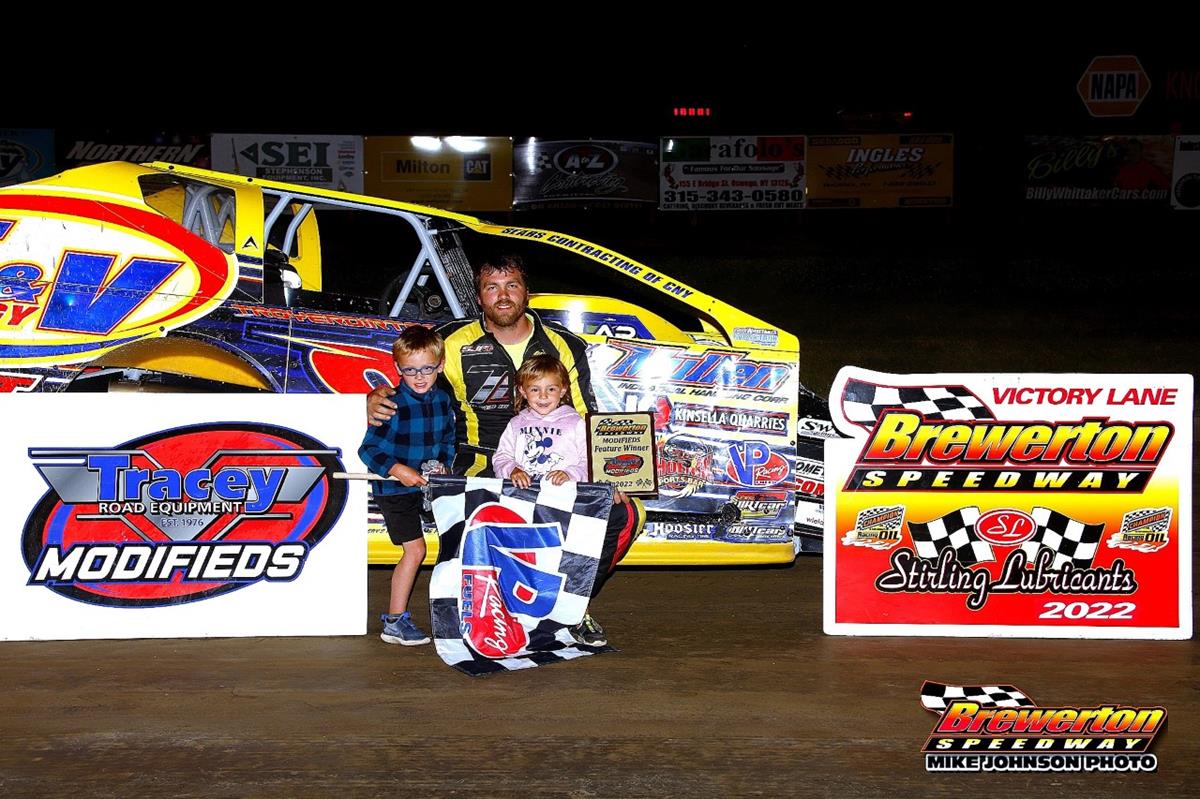 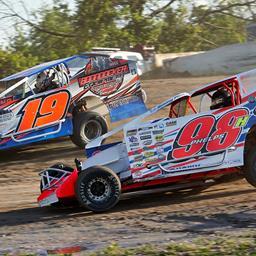 BREWERTON, NY – (July 8, 2022) – Friday night at the Brewerton Speedway fans were treated to great side by side racing, a first career feature win, and tightening point races by the end of the night.

The 35 Lap Tracey Road Equipment DIRTcar Big Block Modified feature came down to a late race charge by Tim Sears Jr. who started thirteenth in the twenty-eight-car starting field. Sears would drive into the lead with the winning pass on lap thirty-one, getting by Tom Sears Jr. for his third win of the season.

Jeff Taylor would take advantage of an up-front starting spot in the 35-lap Modified feature, building up a half a straightaway lead by lap five as Zach Payne, Tom Sears Jr., Nick Krause, and Adam Roberts chased Taylor in the top-five.

On lap ten, Taylor opened up just over a one-second lead as he was putting cars down a lap. Sears, Payne, Chad Phelps who started ninth, and Jimmy Phelps eleventh, raced into the top-five.

Sears was able to run down Taylor and then would drive into the lead on lap fourteen using the bottom groove of the speedway.

With twenty laps showing on the scoring tower and no yellows to slow the pace, Sears, Chad Phelps, Jimmy Phelps, Tim Sears Jr., and Taylor not only battled for the top-five, as they were also racing through heavy traffic.

The first yellow of the race happened on lap twenty-five and would set up heavy hitters Tom Sears, Chad Phelps, Tim Sears, Jimmy Phelps, and Larry Wight who started fourteenth in a 10-lap battle to the finish.

Tim Sears got by Chad Phelps as the final laps started clicking off the scoring tower as he now set his sights on Tom Sears who set a quick pace out front since taking the lead just before halfway.

Tim Sears Jr. had his Troyer working no matter where he put it on the speedway on his way to the front. On lap thirty-one, Sears would go to the topside of the speedway as he would make the winning pass for victory number three of the season. Tom Sears Jr., Larry Wight, Chad Phelps, and Jimmy Phelps completed the top-five.

Buckey Hayes would lead the opening three laps of the 25-lap Sportsman feature when the yellow slowed the pace. Ryan Dolbear took advantage of the yellow as he would drive into the lead on the restart.

Dolbear would open a half a straightaway lead by lap ten as Brandon Carvey, Stephen Marshall, Rich Townsend, and Zach Sobotka raced in the top-five.

A yellow on lap thirteen erased Dolbear’s two-second lead, setting up top runners Carvey, Marshall, Townsend, and Alan Fink right with Dolbear for the shootout to the checkers.

With ten laps remaining, Dolbear and Carvery were in a two-car fight for the lead, with Fink a couple cars back waiting for any mistake by the top-two.

Late yellows that slowed the pace didn’t faze Ryan Dolbear as he nailed every restart and would hold off challenges from Brandon Carvey for his second win of the season at the speedway. Alan Fink, Zach Sobotka, and Stephen Marshall finished third through fifth.

Joel Moller led the opening five laps of the 20-lap Mod Lite feature when Tom Mackey drove into the lead on the topside of the speedway.

A yellow on lap nine would erase Mackey’s two-second lead. When the race went back green, Clayton Brewer would take the lead on lap twelve and looked to put distance between himself and the rest of the field.

Matt Kitts used the topside of the speedway to reel in Brewer and would take the lead with five laps to go. Once out-front, Kitts would not be denied as he went on to win his first career Mod Lite feature at the speedway. Clayton Brewer, Joe Garafolo, Tom Mackey, and Brad Harris completed the top-five.

The 15-lap Four Cylinder feature was a battle royal right down to the checkers. On the final lap, exiting turn four, Dakota Bechler and Chris Bonoffski leaned heavy on each other coming to the checkers, with Bonoffski winning by inches at the finish. Nate Powers, Damien Bechler, and Ray Bechler finished third through fifth.

The Dirt Modified Nostalgia Tour ran a 20-lap feature. Jack Miller from Appalachia, NY, who had never seen the speedway until Friday night was the class of the field, going to victory lane. Joe August Jr., John West, Matt Barbour, and George Valenti completed the top-five.