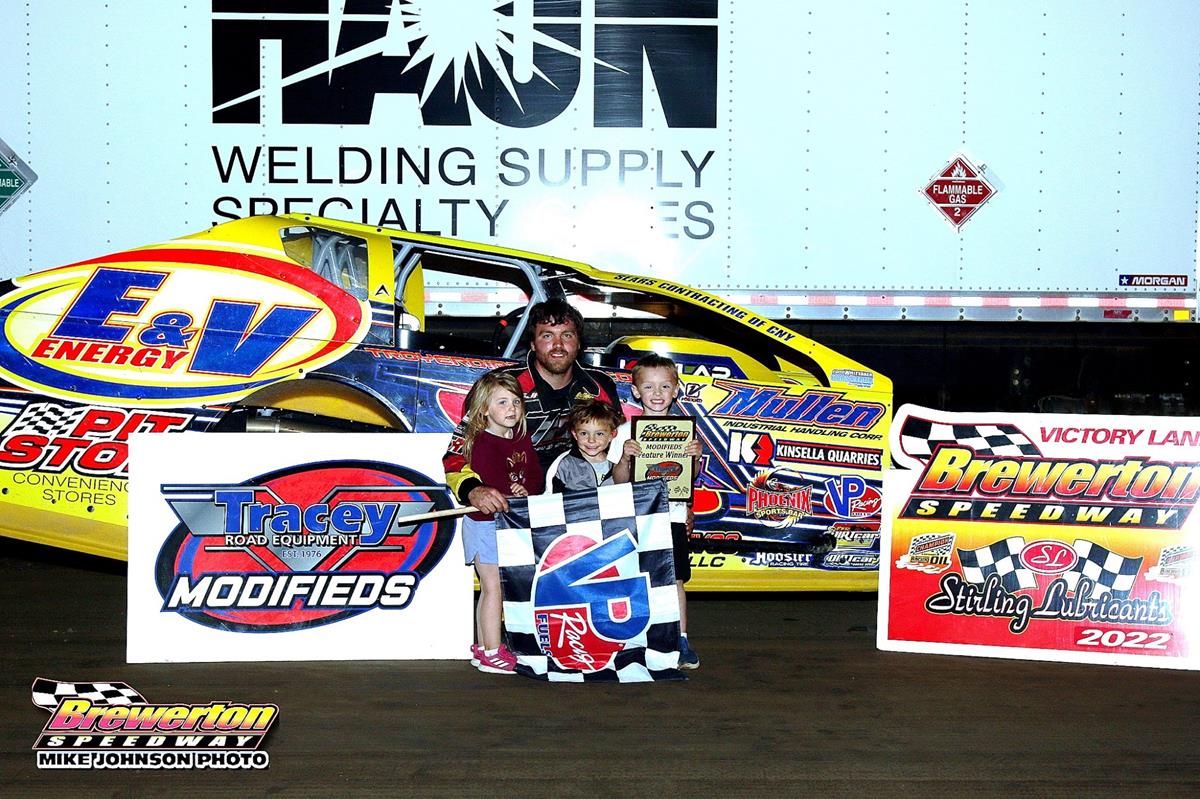 BREWERTON, NY – (May 20, 2022) – Tim Sears Jr. made it known Friday night at the Brewerton Speedway that he is a serious contender for the Tracey Road Equipment DIRTcar Big Block Modified track championship as he cruised to his second straight win on Haun Welding Supply night.

In the 35-Lap Modified feature Gil Tegg shot from his fourth place starting spot to the lead and by lap five opened a half a straightaway lead while Max Hill in a small block, Jim Witko, Tom Sears Jr., and Tim Sears Jr. were in a tight fight for top-five positions.

With ten laps complete, Tegg was still setting a quick pace out front leading by a straightaway as you could have thrown a blanket over Hill, Tim Sears who started 14th, Tom Sears 11th and Larry Wight 15th as they battled for second through fifth.

The yellow would wave on lap twelve with Tim Sears taking advantage on the restart going from fourth to second and then set his sights on the lead.

On lap fifteen Sears shot by Tegg into the lead and immediately started pulling away from the field.

With ten laps to go, Sears was in another zip code leading by 4.3 seconds with Wight, Jimmy Phelps, Tom Sears, and Tyler Trump showing second through fifth on the scoring tower.

The caution lights would flash on lap twenty-six erasing Sears' big lead and giving the field one last shot at Sears and the win.

When the green came back out Tim Sears would once again pull away from the field and go unchallenged the rest of the distance for his second straight victory. Jimmy Phelps, Tyler Trump, Tom Sears Jr., and Chris Hile completed the top-five.

The 25-Lap Sportsman feature would see Savannah LaFlair and Ryan Dolbear swap the lead back and forth in the early going while the racing behind them was two and three wide in battles for position.

With ten laps complete, Dolbear led by ten car lengths over LaFlair with Stephen Marshall, Kyle Devendorf, and Earl Rudy not far behind the top two.

Dolbear would open a half a straightaway lead with ten laps to go over LaFlair as Devendorf, Zach Sobotka, and Stephen Marshall were still within striking distance of the top two.

The yellow would wave on lap nineteen erasing the 2.5 seconds lead Dolbear had, setting up a six-lap shootout to the checkers.

In the 20-Lap AmeriCU Credit Union Mod Lite feature it looked like Justin Williams was heading to a feature win when disaster struck on lap fifteen when huge smoke came out of his car and a large trail of fluid on the speedway.

Kyle Demo would then inherent the lead and would hold off a late charge from Clayton Brewer for the win. Zach Babcock, Mike Mullen, and Joel Moller would finish third through fifth.

Damien Bechler and Chris Bonoffski put on a bumper to bumper and side by side battle for the entire 15-Lap Mirabito Four-Cylinder feature with Bechler parking his car in victory lane. Chris Bonoffski, Ray Bechler, Clayton Koch, and Kingston Sprague finished second through fifth.

This Friday, May 27 kick off your Memorial Day weekend at the Brewerton Speedway for wings, speed, methanol, and big block grandstand-shaking horsepower presented by A-Verdi Storage Containers.

Camping is free. Please follow the signs along the parking lot tree line to the designated camping area.

Any questions you might have and for marketing opportunities contact Cory Reed at (315) 668-6906 or cory@brewertonspeedway.com. For all the latest news, go to www.brewertonspeedway.com powered by My Race Pass and like the speedway social media pages.