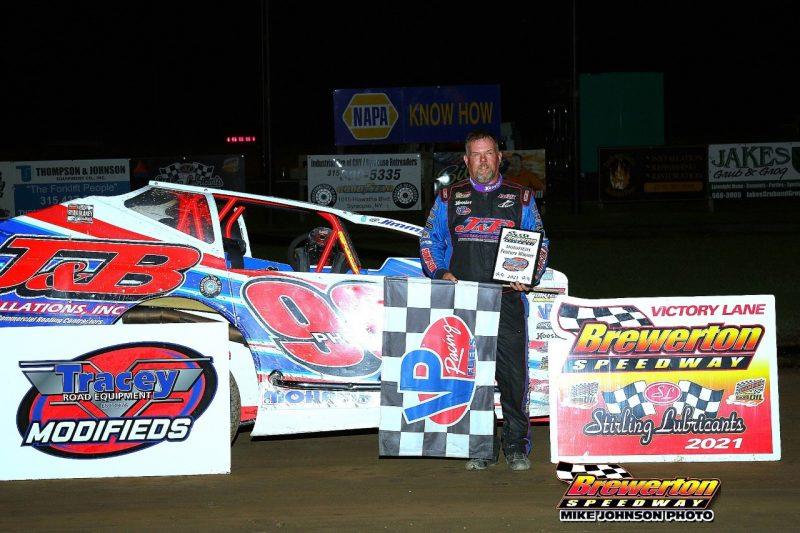 Jimmy Phelps Brewerton Speedway Modified Win Keeps Him in The Hunt for The Championship: Top-Three in Sportsman Separated by Four Points

Consistency has been the key all season with neither driver going to victory lane until Larry Wight picked up the win on August 6th.Â Â Jimmy Phelps came into the night just 16 behind Wight with three-point races left in the 2021 season.

Friday night Phelps was a man on a mission. After starting 10thÂ Phelps would take the lead on lap 10 in the 35-lap feature and would never look back for his first win of the season. Larry Wight started 15thÂ and finished fourth. Heading into Friday, August 20thÂ Larry Wight will be holding a very slim six-point advantage over Jimmy Phelps.

Not to be outdone, the DOT Foods DIRTcar Sportsman points race is a battle royal at the front going into August 27th.Â Â Zach Sobotka, Alan Fink and Amy Holland are separated by four points.

Yellows on lap 3 and lap 6 kept the racing throughout the field two and three wide with Phelps still showing the way out front.

Jimmy Phelps who started 10thÂ took advantage of the lap 6 yellow as he was able go from fourth to second on the restart as he then set his sights on Chad Phelps.

After a side-by-side battle with Chad Phelps, Jimmy Phelps took the lead by inches at the flag stand on lap 10. Tyler Trump, Jeff Taylor, and Joe August were in a tight battle for third through fifth.

With 20 laps showing on the scoring tower Phelps was on rails building an almost 3 second lead as Chad Phelps, Jeff Taylor, Tom Sears Jr., and Trump raced for top-five spots.

Phelps was still in his own zip code with 10 laps to go, putting cars down a lap as he was heading to win number one of the season. Chad Phelps, Taylor, Sears were locked in a close battle with Tim Sears Jr.

Two late yellows gave the field a chance to steal away the win from Jimmy Phelps. Phelps got great restarts both times and was never seriously challenged as he cruised under the checkers over one second ahead of Tom Sears Jr. Chad Phelps, Larry Wight, and Tim Sears Jr. rounded out the top-five.

Richard Murtaugh showed the way out front in the early going of the 25-lap Sportsman feature with Jeff Prentice, Tyler Murray, Quinn Wallis and Max Hill making it a close five-way race at the front.

Murtaugh would open a lead of six car lengths on lap 10 with Prentice, Murray, Wallis, Hill, and title contender Alan Fink in a tight pack for second through sixth.

Yellows on lap 13 and lap 18 slowed the action and gave the top-five a shot at Murtaugh. Richard Murtaugh hit his marks the rest of the distance going under the checkers one second ahead of Alan Fink for his first ever win at the Brewerton Speedway in the Sportsman division. Chris Mackey, Jeff Prentice, and Zach Sobotka finished third through fifth.

Tucker Halliday and Tom Mackey would trade the lead back and forth in a side-by-side battle in the early going of the 20-lap Mod Lite Feature with racing behind them two and three wide.

As the race went on Justin Williams made a late charge as he has done so many times this season to grab his seventh win of the year by 3.512 seconds ahead of Mike Mullen. Tucker Halliday, Joe Garafolo, and Hunter Lawton finished third through fifth.

In the 15-lap 4-Cylinder feature, Ray Bechler would lead the opening 6 laps when his son Damien Bechler used a car at the tail of the field as a pick driving into the lead. Once out-front Damien Bechler drove away to his second win of the season. Ray Bechler, Chuck Powelczyk, Quinn Wallis, and Dave Mills finished second through fifth.

This Friday, August 27 will see the Modifieds, and Sportsman continue their intense battle for the championships on the second to last night of points on John Wilber Snap-On Tools night. The Mod Lites & 4-Cylinders will be in action with the 4-Cylinders crowning their 2021 Track Champion.

Adult grandstand admission is $15 with everyone 18 years old and younger admitted free. Pit admission is $35. Gates will open at 5:30 pm with racing at 7:30 pm.