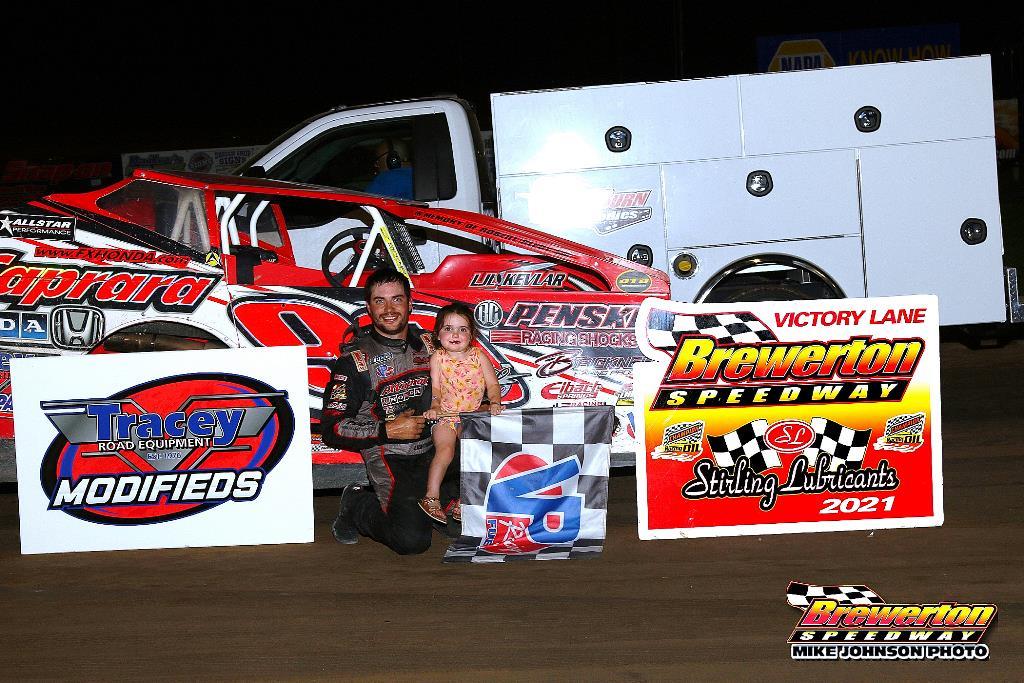 In the 35-lap Modified feature Wight ran down race-long reader Jeff Taylor taking the lead on lap 16 and would never look back for his first win of the season and taking the point lead with three points-paying races left in the 2021 season.

The 35-lap Modified feature would take the green and go yellow quickly. In the first turn Tyler Trump, Jimmy Phelps, Tim Sears Jr., and Billy Decker were all involved in a chain reaction wreck that ended the race for Decker and Sears who couldnâ€™t make quick repairs in the pits.

When the race went back to green Jeff Taylor would open an almost full straightaway lead while Jim Witko, Larry Wight, Roy Bresnahan and Tom Sears Jr. were locked in a tight battle for second through fifth.

Taylor was still clicking off quick times with 10 laps complete with Wight, Witko, Michael Maresca and Bresnahan chasing the leader.

Wight was able to use a lapped car as a pick and would drive into the lead on lap 16 and looked to quickly put distance between himself on the rest of the field.

The caution would come out on lap 23 erasing Wightâ€™s almost full straightaway lead. When the race went back to green nobody challenged Larry Wight as he would cruise to 3.271 seconds win over Jim Witko and Jeff Taylor who came under the checkers almost dead even. Chris Hile and Ron Davis III rounded out the top-five.

The 25-lap Sportsman feature saw Earl Rudy grab the lead at the start and by lap 5 opened an almost 10 car length advantage as Riley Rogala, Tony Finch II, Chris Mackey, and Max Hill raced in a tight pack for second through fifth.

On lap 8 Mackey moved into second and set his sights on the leader and would need only one more lap running the topside of the speedway to drive into the lead.

The yellow would wave on lap 13 erasing Mackeyâ€™s 2.5 second lead. When the green came back out and to the checkers there was no stopping Mackey as he collected his third win of the season. Amy Holland, Alan Fink, JJ Courcy, and Tyler Murray rounded out the top-five.

Rick Demo would grab the lead on lap 1 of the 20-lap Mod Lite feature and by lap 5 you could have thrown a blanket over Demo, Brad Harris, Mike Mullen, Clayton Brewer, and Joe Isabell battling at the front of the field.

At the halfway point Demo still led as Mullen, Harris, Justin Williams, and Brewer raced in a tight pack for the first five positions.

On lap 17 Williams and Brewer both drove by Demo into the top-two spots as the final laps started clicking off the scoring tower.

Justin Williams would outrun Clayton Brewer to the checkers for his sixth win of the season. Mike Mullen, Rick Demo, and Brad Harris finished third through fifth.

The 15-lap 4-Cylinder feature would see Ray Bechler lead the opening 4 laps before Quinn Wallis took over the lead and then would outrun Chuck Powelczyk by almost two seconds at the finish. Eric Rowley, Damien Bechler, and Donny Rider rounded out the top-five.