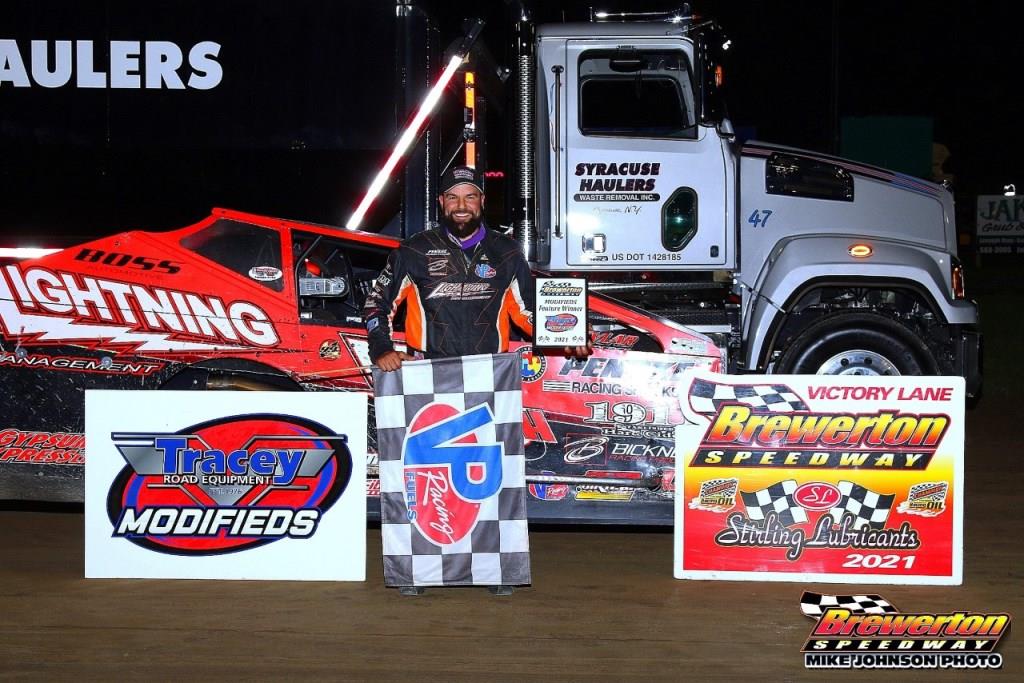 Â BREWERTON, NY â€“Â Friday night at the Brewerton Speedway one of the fan favorites Chris Hile went to victory lane for the second time this season in the Tracey Road Equipment DIRTcar Big Block Modifieds on Syracuse Haulers night.

In the 35-lap feature Hile, after moving into second, would chase down and pass race-long leader Jeff Taylor on lap 19 who was showing smoke for several laps before dropping out.

Once out-front Hile would get great restarts after late cautions while outrunning Billy Decker and Larry Wight to the checkers for win number two this season.

Jeff Taylor and Tom Sears Jr. in his small block would bring the Modified field down to the green with Taylor grabbing the early lead in the feature.

The previous week's feature winner Tim Sears Jr. would spin in turns one and two on lap 4 to bring out the caution. Sears would come from the back of the field to a top-five finish.

Taylor, in a brand-new car, would sprint out to a full straightaway lead on lap 10 while Roy Bresnahan and Billy Decker were in a tight fight for second and third and Tom Sears Jr. and Hile showed in the top-five.

On lap 15 Taylor still led but his car was showing smoke that developed a few laps earlier as Hile was starting to reel in the leader. Decker, Bresnahan and Ron Davis III were still in contention, racing in the top-five.

On lap 19 Hile ducked under Taylor and drove into the lead while Taylor slowed and would go to the pits.

With 10 laps remaining Hile had a half-a-straightaway lead as teammates Billy Decker and Larry Wight were in a tight fight for second and third, with Tim Sears Jr. and Ron Davis III in fourth and fifth.

Three late yellows would give the field a shot at taking the lead away and the win from Hile. Chris Hile was not to be denied as he got great restarts and would outrun Billy Decker and Larry Wight for the win. Jimmy Phelps and Tim Sears Jr. completed the top-five.

In the 25-lap DOT Foods DIRTcar Sportsman feature Tony Finch II would take the lead at the drop of the green and by lap 5 opened an almost 10 car-length advantage. Behind Finch you could have almost thrown a blanket over Earl Rudy, Matt Caprara, Zach Sobotka, and Tyler Murray who battled hard within the top-five.

Sobotka would blast into the lead on lap 8 from his 14thÂ starting spot as he then looked to drive away from the field.

With 10 laps to go Sobotka still led with a 5-car length advantage over Murray. Behind the top-two Finch, Chris Mackey, Alan Fink, Amy Holland, and JJ Courcy were in a tight battle for third through fifth.

Over the final laps Sobotka looked to drive away for the win. Murray could keep pace with Sobotka but couldnâ€™t find a way by as Zach Sobotka was too quick grabbing his second win in a row by 0.370 of a second ahead of Tyler Murray at the checkers. Chris Mackey, Tony Finch II, and Amy Holland finished third through fifth.

Doug Williams and Tom Mackey would lead early laps in the 20-lap AmeriCU Credit Union Mod Lites feature. The story of the race was a battle royal over the second half of the feature between Justin Williams and Mike Mullen as the two swapped the lead back and forth almost every lap. The difference in the race was a lap 19 caution and restart that for a green, white, checker finish that would see Williams win his second in a row and fifth overall this season. Clayton Brewer finished second from his 12thÂ starting spot. Mike Mullen, Tom Mackey, and Rick Demo finished third through fifth.

The 15-lap Fleet Repair 4-Cylinder feature saw Ray Bechler led the opening 2 laps before Quinn Wallis took over the lead. Once in the lead Wallis dominated the rest of the way winning by over 5 seconds over Ray Bechler. Chuck Powelczyk, Eric Rowley, and Damien Bechler completed the top-five.

The wild and crazy One-on-One Spectator Races would see Nick Harmer picking up the victory.

The three top-finishing DIRTcar 358-Modifieds will receive $300, $200, and $100 respectively in addition to their base purse.

Adult grandstand admission is $15 with everyone 18 years old and younger admitted free. Pit admission is $35. Gates will open at 5:30 pm with racing getting the green flag at 7:30 pm.